Ad portals and the half blood vulnerability

Before we start, some companies runs “Advertisment portals” out of their core part of the application which gives the users features for them to sponsor their products/apps/posts …etc in the core app, For example Twitter,Google Adsense,Facebook Ads and more over, let’s take Twitter as example, a user wants to sponsor his product at Twitter Core Application so Twitter Ads allows him to create an adverisment and with advanced options like for who this ads will be displayed (gender/age …etc) or where (specific country) then Twitter will display this script (advertisment) in it’s core app to the targeted users and the user (the sponsor) here should pays, The ads portal have different types of ads display and the price differs from each one, these types are known as CPC,CPM,CTR …etc (“Cost Per Click”:means how much you’re willing to pay when someone click on your ad,”Cost Per Mile”: means how much money you’re willing to pay for each 1000 view to your ad …etc) Usually CPCs are the expensive type cause it will brings more customers to your product more than views only, Now it does make sense how the ads gets displayed in the app and why it differs from each type and how these applications works now let’s try to mess up …

The half blood vulnerability:

Does these applications have a strong design or we can really mess up with and publish our CPC ads for CPM price, or even without paying a cent (totally free) ? Yes actually we can violate the whole business logic of the app here and get our ads published for free and we’ll get customers to out products with no cent given, Here’s some examples of bugs I’ve found as Bug bounty Hunter in real world companies but as I said “half blood vulnerability” this have no security threat on the users or the company but it will harmly violates the business logic of the app and the developers should really care about (fix them),

the bug was accepted,fixed and paid 500$ 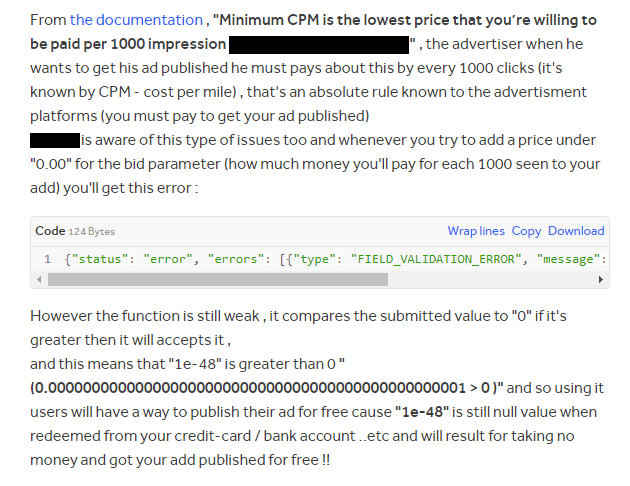 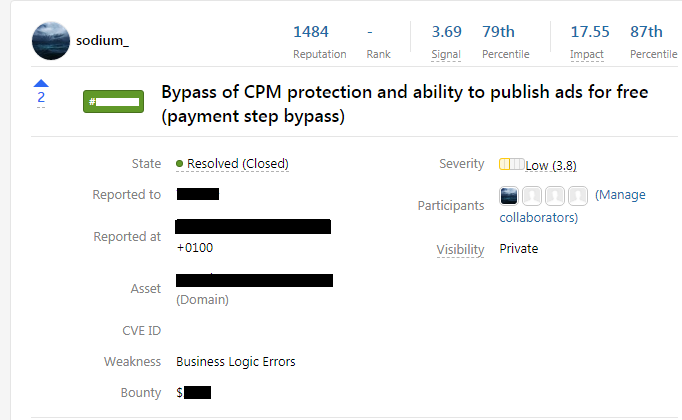 the bug was submitted,accepted and rewarded $100 bounty ,I was about to getpaid as medium here but the developers doubled the secure design already, there was another function in the backend which does not accepts values under 0,01 but they wanted to fix and apperciate my report,

These were some cases I found on real companies that runs bug bounty program ,

And big thanks to Yassine,Sohaib,Elmahdi and Ayoub for your support and sharing some of your knowledge with me !!

Note: The title was based on a Harry Potter movie title “Harry Potter and the half blood princesse” (it’s not a technical word) :)

Thanks for your time, Hope it helps :)

This page was generated by GitHub Pages.